The future of the Mediterranean Sea

The study on past sea level changes contributes to the understanding of the ongoing dynamics and to depict scenarios of sea level rise in the future, also due to climate change. This rise is due to the combination of natural and anthropic components. The topic was addressed by Prof. Kurt Lambeck in the seminar " Models of isostatic and tectonic contribution to past sea level change in the Central Mediterranean", hosted by ISPRA on May 27th.

As explained by Prof. Lambeck past sea level changes can be faced starting from the study of the geological indicators (for the most ancient times) and of the archaeological and instrumental ones (more recently) that record the sea fluctuations with respect to the land on which these indicators are placed; for this reason the trend of these fluctuations over time are very different from one place to another.

The first analysis concern with the distinction of the components of the relative sea level changes, which affect the oceans (eustatic) or the lithosphere (isostatic, tectonic, subsidence). The first component essentially concerns the physics of the water (temperature, salinity, etc.), while those relating to the earth depend on the characteristics and on the distribution of the masses in depth.

Prof. Lambeck's research started with the modeling of the dynamic of the masses, in the lithosphere and in the mantle, related to the extent and weight changes of ice sheets at high latitude and on the mountain range during last glaciations.

Due to the low viscous behavior of the upper mantle and the relative adjustments of the lithophere, these load changes produce the crustal lowering below the glaciers during their growth (glacial cycles) and the consequent crustal uplift in the peripheral areas, around at mid-latitudes; during the interglacial cycles this vertical motion is reversed.

The wide experience in the isostatic modeling of different geodynamic setting around the world, has allowed Prof. Lambeck to properly deal with the Mediterranean area, characterized by a remarkable complexity both due to the active crustal dynamics and to the small size of the basin; this in fact determines a sensitivity of the sea level fluctuations to climate changes much greater than in the ocean basins. Particular attention has been paid to calibration of isostatic models taking into account past sea level proxy data; in this framework, an important contribution was provided by several researches on the Mediterranean area relating to other geologic, geomorphologic, tectonic, historical and archaeological proxies.

The analysis of all these components led to a reliable model of the past sea level changes. Moreover  this study allows to understand past fluctuations and to estimate the contributions of natural components to sea level rise scenarios due to climate change.

Starting from Prof. Lambeck’s model an assessment of coastal risk, induced by sea level rise, has been applied to some Italian coastal plains. The analysis, conducted thanks to the collaboration of a large group of researchers  (including ENEA, INGV, CNR-ISMAR, ISPRA and the Universities of Bari and Trieste), has produced a series of scenarios that were collected in a database, delivered to ISPRA to promote and raise awareness of the risks associated with climate change, through/ the Geologic Survey of Italy Portal 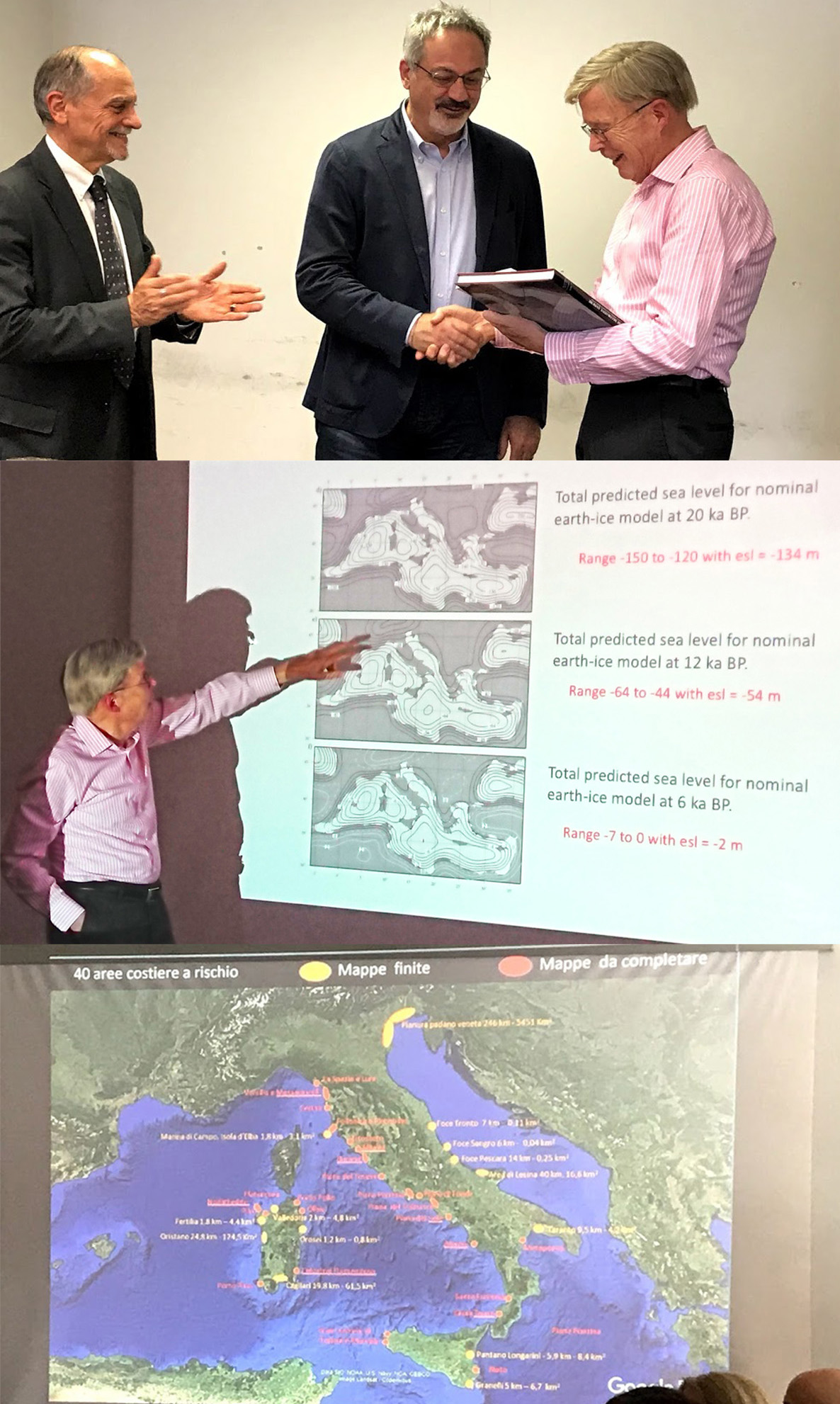